Dear Readers,  Walt and I are skipping across the pond to England for a week!  I'm so excited, I have never been abroad and to quote my son, "The trip I have waited for my entire life!"

I doubt I will have access to  computers and whatnot, but you never know.  Otherwise, I will take lots of pictures and post upon my return.  In the meantime,  take care while I am gone and I shall see you when I get back.

Tea and crumpets here I come!
Posted by Unknown at 9:51 AM No comments:

And Now for Something Completely Different

Walt and I went to see Jersey Boys in New York!  What a hoot!  It was an amazing musical (and I really don't like musicals much).  But, aside from that tidbit, after the show, I waited by the stage door and collected an autograph or two, screaming like a teenager from the 50's, as opposed to being in my fifties.  Anyway, I took some pictures of New York and here they be. 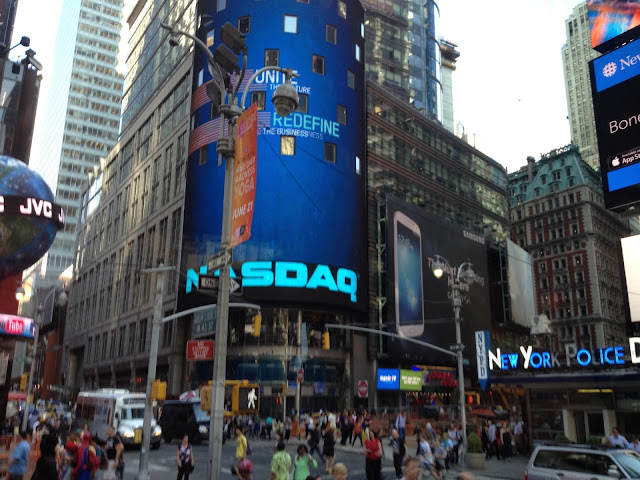 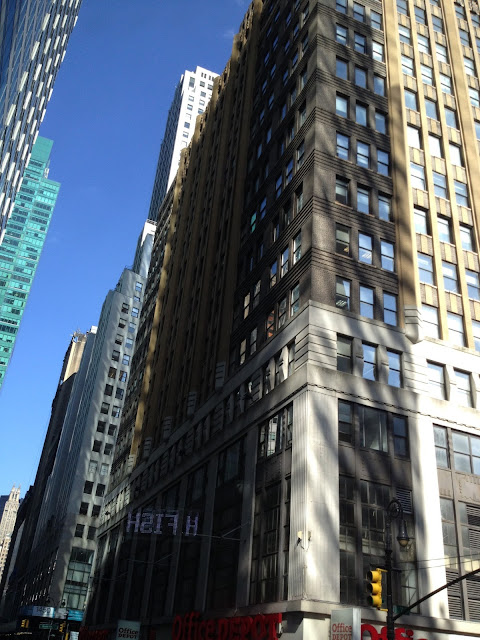 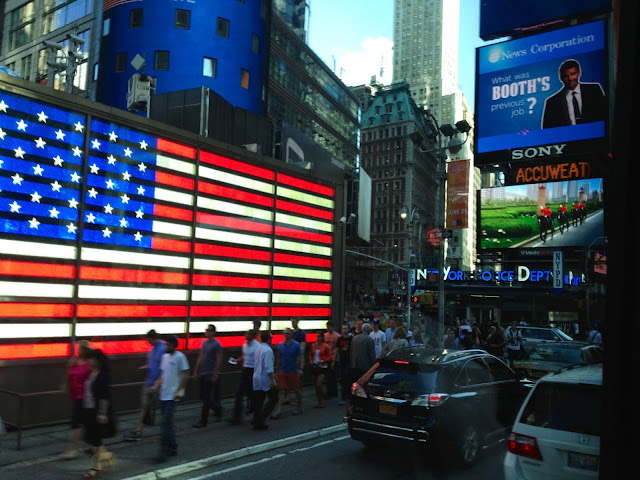 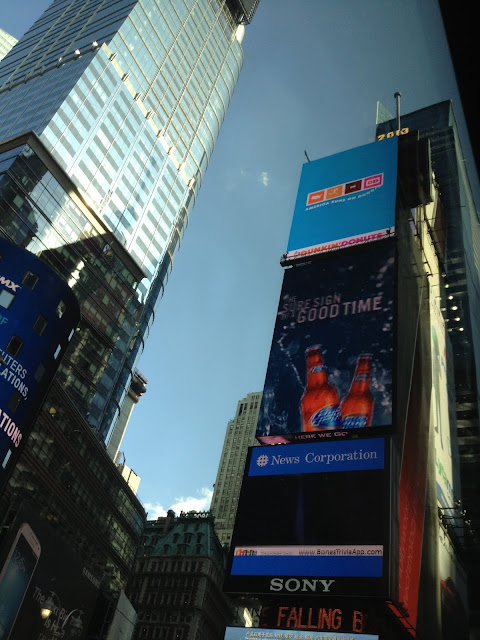 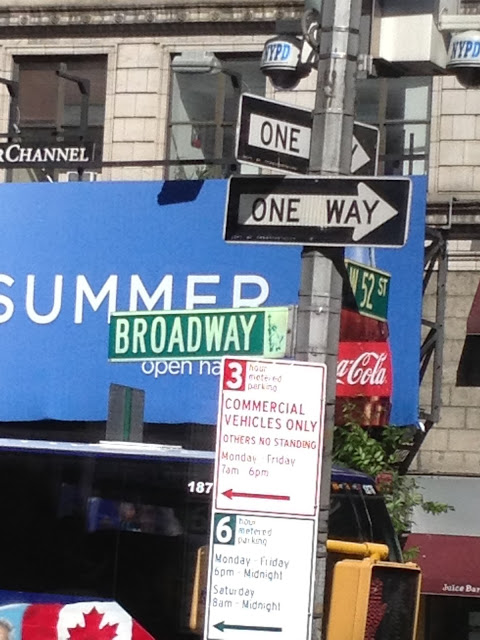 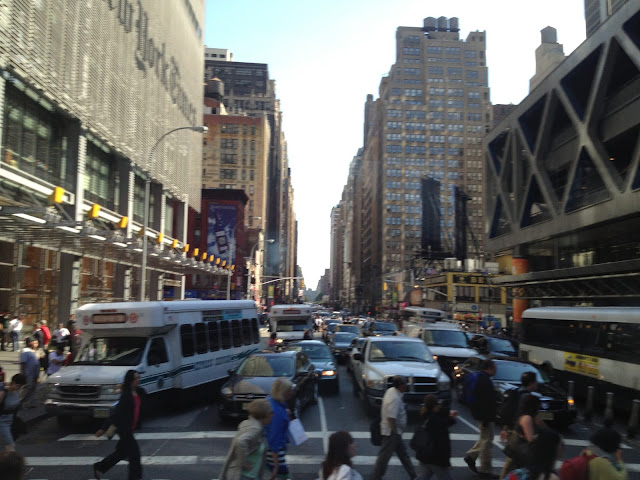 Posted by Unknown at 6:13 AM No comments:

I've been so lazy with the slow process of healing.  I was able to see the surgeon this week and while he gave me two thumbs up, he acknowledged that I was going to be tired feeling for a while and sore for about three months.  Other than that, though, I feel fit as a fiddle!

I would like to fill in a little more back story on my second year in the bush.  First, November of that year, I remarried.  No, not an Alaskan.  Women ask me all of the time if it is true that the male/female ratio is more favorable in Alaska.  It is.  But instead I married an old friend, Walt, who was living in New Jersey which is how I migrated from Ohio.  We have been married three and a half years and it has been a good thing.

Second, I spent part of that school year working in Fairbanks.  Allow me to sum that up: I LOVE Fairbanks.  It is a college town that is immensely diverse and filled with lots of things to do, panoramic views and some of the nicest people I have ever met.  Over thirty languages are spoken in the Fairbanks schools.  The two also boasts two military bases and I had the extreme pleasure of working with some of the children at Ft. Wainwright.  Nice nice kids!

I don't know WHAT I was Thinking!

The road to health appears to be a bumpy one!  Yesterday I was slogged down and barely able to walk, but nevertheless, I keep persevering and hoping to feel back up to par soon.  In the meantime, more from my previous writings:


Being afraid of students was unimaginable to me.  After working for years in high-risk urban settings, I found it illogical to be afraid of these kids.  I maintained an inherent belief that kids are kids, no matter what.
I also worked with a student at the detention center.  That, too, was a very different experience for me.  I had worked previously in lock down, but this felt more foreboding as doors clanked shut, buzzers buzzed to allow entrance and again I was never left alone with students.  The entire experience made me want to get back into one of the village schools and see regular kids, kids whose worlds had not been so turned up side down.
In the villages, the weather was much milder than the previous year.  Surprisingly, the lower 48 was hammered with snow and wind throughout the winter, but Alaska’s weather was mild in comparison.  Wicked winds were intermittent and there was significantly less snowfall.  I wondered how much it had to do with global warming and if the unexpected warmth would somehow alter the ecology.  My musings provided me with no answers as I realized the school year was meandering along and I had work to do.


However, the second year did bring the unexpected pleasure of being recognized.  Sometimes when walking out, people randomly stopped to offer me a ride.  I was becoming a permanent fixture and I guess people were realizing they could invest time and energy in me since I’d returned for a second year.  Some of the teachers in the villages seemed happy I’d decided to return.  Often the turnover was such that rarely had they had the same support staff two years in a row.
Posted by Unknown at 4:44 AM No comments:

So I thought, I'd go ahead and post from my previous writings:

A new psychologist had been brought on staff.  She didn’t appear to be receptive to my “vast” experience and wanted to figure things out on her own.  When talking about the upcoming weather changes, she appeared amazed that she would indeed be expected to travel out in weather than would pale in comparison to the lower 48.
My duties had changed, too, due to the change in staff.  I picked up several new sites including the juvenile detention center, the alternative high school and the residential treatment center.  I had worked previously with incarcerated students, but only occasionally had I worked with students in clinical settings.  I found it challenging to adjust to the rules.  I wasn’t allowed to be alone with the students, the care providers often made mention of “fear of my safety”.  I was not accustomed to being afraid of students.  But these kids were of a different kind.  Their experiences had created unfamiliar problems, sometimes the victims of fetal alcohol spectrum disorder; their behaviors were often unmanageable.  They had been abused and violated from the point of conception; the thought that they should care about another’s safety was foreign to them.  I was not used to the lack of compliant behavior from students.  I had to learn new ways to approach some students, students who were so clearly damaged.


One of the most challenging kids I faced during the second year was working in the residential treatment center.  The student I worked with there made it very clear to everyone that he preferred to be somewhere else.  Tantrumming was a minute by minute occurrence.  He had been relegated to solitary:  a room with no furniture, no door and someone outside of the doorway watching his every move.  There was a window but it was too high to see out of.  The only thing in the room with the student was a 600-piece puzzle.  It had taken him about two hours to complete the outside frame of the puzzle.  I sat on the floor with him, talking to him and slowly tried to get one piece in right.  I failed miserably both at reaching the student and at the puzzle.  He became agitated and the guard at the door was signaling me to get out of there quickly.  I elected to stay, giving the student space, but not leaving.  While I eventually left unharmed, I received a lecture about personal safety.
Posted by Unknown at 10:51 AM No comments:

Just a quick note to say that I had the correction on my stomach and it went well.  Recovery is slowly plugging along.  I will back up and blogging soon and I have pictures to post.

Take care, c
Posted by Unknown at 6:27 PM No comments:

My friends who are still in Bethel are complaining about the continued cold.  It has snowed and the temps are still hovering around freezing.  Even Friday morning, the temperature was 15 degrees.  Break Up is slow coming this year, that time when the river ice has sufficiently cleared for boat passage.  I came home early this year due to pending medical procedures.  I will be having surgery on Wednesday to correct a birth defect.  I hope to be up and about soon and posting again with pictures.  In the meantime, this is from my second year in the Bush:

As a seasoned professional, it didn’t occur to me that the second year could be more difficult than the first.  I thought I would sail through and be faced with few issues.  Never say never.
The friends I had made as part of my network for survival, other professionals who made their careers in Alaska had not returned and I was left to my own devices.  The house where I had stayed the previous year was no longer the home to other itinerant specialists, but instead now housed an array of pilots, mechanics and hunting guides.  All men.  All very sloppy men.  I was the only woman and I felt so alone.  I found myself staying more and more in my room and not making any effort to socialize during my down time.  I became more and more reclusive as the year dragged on.  But I had my work and that proved even more challenging.
I quickly learned to be cautious when opening the refrigerator.  The current residents being hunting guides et cetera frequently put their assorted gleanings in the fridge.  “Uhm, Bobby?  What is this in the big bowl?”  Without even looking up, “Bear”.  You’d have thought I’d learn after a while, but my morbid curiosity got the better of me.
But most of all, I missed my family.
I missed the other itinerants.  The loneliness was overwhelming sometimes.  I missed the laughter, the sharing of stories and the insights they provided due to their experience.  Now I was the one with the experience.

Posted by Unknown at 5:05 AM No comments: